Why did african tales never end with the all lived happily ever after ? We do not have Cinderella and the other princesses, most stories do not even end happily. Usualy the aim of stories is to teach a lesson on life, respect, selfishness all those values that our parents and the society want us to believe in and transmit after to our own kids.

Some people might think that because they are full of morals, african tales are less funny nor interesting for children, it is true that kids seem to pay more attention on walt disney tales or pixar, like Ratatouille or Cars. According to me, the earlier we are aware of the reality of life the better we are prepared to face the world. Let us look at this short tale :

«  Appreciate what you have

One day a father from a very wealthy family brought his son to the village, to show him how poor people leave. They spend few days in a farm with a poor family. Back in the city the father asks for his son's feelings.

After those words the father was speechless and instead of giving his son a lesson, he was the one who received one.

The morale of this story is that we often forget what we have to focus on what we do not have, something that can be of no value to us may be like gold to someone else, therefore we should learn to appreciate what we have.» 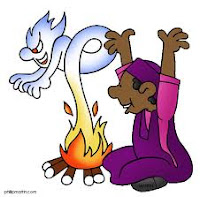 More than a story, a good tale means also sharing time, we all remember a day in a village, or city with our cousins, brothers, or friends around fire eating in the night while someone is telling a story. After, we could be sometimes so scared that we could not walk alone. African tale is also a context, stories usualy passed down to each generation. That is a moment of joy.

However now most of african kids are more aware and maybe interested of what is coming from Walt Disney than the old stories because they do not go often to the village. For me, it is a mistake because first of all those tales feed the imagination of kids, and some how they make them more smart. Secondly they teach them a lot of things about Africa (animals, geography, rivers, culture...). Finaly the are really good written even when they are translated the quality of the language is good, with a lot of vocabulary.